Adi Shankaracharya, the great philosopher who re-established the Vedic sanatana dharma, was born in Kalady, a village in the present Ernakulam district of Kerala state in India in 507 BC on the Vaisakha Shukla Panchami day of the Hindu calendar. His father was Shivaguru and mother Aryamba. At the age of 8 years, he received the initiation into sanyasa order from the venerated GovindaBhagavatpada on the Kartika Shukla Ekadashi. He wrote commentaries on the Prasthanatrayishastras. Shankaracharya appeared at a time when the circumstances were such that the sanatana dharma was rendered devoid of any strength, was torn apart and destroyed. There were also foreign invasions. By his scholarly aptitude and strength of his penance, he defeated Buddhist scholars in philosophical debates. He also defeated scholars like Sri Mandana Mishra by his command of shastras and made him his disciple. He had profound accomplishments by age 16. He also influenced King Sudhanva and made him his disciple. Adi Shankaracharya traveled far and wide across several regions, preached and professed extensively the vedicsanatana dharma in an all too brief lifespan of 32 years. He woke up the society that was in a state of deep slumber. He wrote many books and had many temples renovated in his lifetime. In order to have the dharma rule over the country always and have spiritual values progress, the great seer established four dharmic institutions. In the constitution of directional (amnaya)mathas, the Acharya says

meaning, in the Satya Yuga, Brahma is the guru of the whole world, in Treta Yuga is the sage Vasishta, in Dwapara Yuga it is Veda Vyasa and in the Kali Yuga it is BhagavanShankara. The acharyas of the four Peethas or the seats of Dharma are also decorated with the title of Shankaracharya. In the east, Shankaracharya established the GovardhanaPeetha at Puri whose presiding diety is Purushottam to deal with the knowledge of Rig Veda, the SharadaPeetha dedicated to Yajur Veda at Sringeri in Karnataka in the south, DwarakaPeetha with presiding deity of Dwarakadheesh  dedicated to Sama Veda at Dwaraka in Gujarat in the west and finally, in the north, at Badarinath as Jyotirmath dedicated to Atharva Veda. He also appointed his disciples Padmapada, Hasthamalaka, Sureshwara and Totaka as the Shankaracharyas of the four Peethas in East, south, west and north respectively. Within a short period of time he overpowered Buddhists, atheists and contaminationsand established a vedic social order that was impartial, free of exploitation and driven by dharma (as in scriptures) and also Bharat as a sub-continent. At the age of 32 years he attained samadhi by his divine play. At the time of Shankaracharya, Bharat was a conglomeration of many political, social and dharmic entities. Travelling was difficult and communication was limited. He grouped his disciples into ten categories - vana, parvata, aranya, tirtha, ashrama, giri, puri, bharati, sagar and saraswati. These sanyasis were tasked to propagate dharmic values after due inquiries in the areas assigned to them and unify the society. The GovardhanaPeetha was established in 486 BC in the Karthika month of the Hindu Calendar. Sri NischalandaSaraswatiMaharaj is the 145th Shankaracharya of this peetha. Adi Shankaracharya initiated a practice that the head pontiffs of each of the four peethas would be considered his image. The lineage of the Shankaracharyas of the four peethas has continued incessantly so far. The role of Shankaracharyas of the four peethas in protecting and growing the Hindu sanatana dharma is very significant. Even today the four peethas of Shankaracharyas is glorifying the unity of the nation. Adi Shankaracharya was a famous and worldwide spokesperson of sanatana dharma. By providing an existential platform for vedic culture he placed a strong foundation for ages to come. The sanatana dharma is eternal and is auspicious for the whole world.

In keeping with the traditions of Adi Shankaracharya, the pontiff of Puri, JagadguruShankaracharya Sri NishchalandaSaraswatiMaharaj, being merciful to everyone, has started institutions such as Dharma SanghaParishad, Aditya Vahini and AnandVahini to protect the country, its values and integrity. Under the aegis of these institutions the supreme sanatana dharma is being propagated and transmitted all the time. 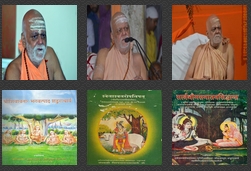